Well, I'm just not a photographer, although this seems about the best I can do. I usually hire a professional if my work actually appears in something like in print.

Bill Guffey's Virtual Paintout took a number of us participants to Nova Scotia in November and I screen-shot a bunch of pictures from Google's Street View function. I figured that this lighthouse would be a popular image and I had to do it too (I think watercolorists are required to do lighthouses - it's somewhere in the rule book). Anyway - I've got a slow collection going of lighthouses I've been doing primarily because we frequent North Carolina's coast whenever we get the chance. Because I still haven't visited Maine (I'm a Winslow Homer freek) this on-going participation in VPO gave me an excuse to do this one.
Posted by Gary at 1:24 PM 16 comments: 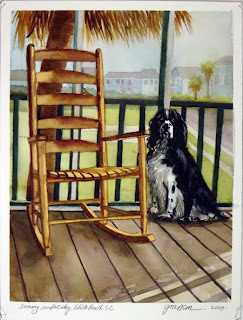 Just another quick watercolor whilst I do my research on Elizabeth Cotten. Last month we celebrated my daughter's birthday by going down to Edisto Island, South Carolina. Ann and I have always loved that place (Jasper Johns used to own a house down there). My daughter has come to love the place too - so we've been staying there a couple of times a year for a little while now. I had to do this wc of Sammy our Springer. Both dogs love any holiday - where we take three or four walks on the beach per day - big difference from the work-a-day life we have here in the mountains. 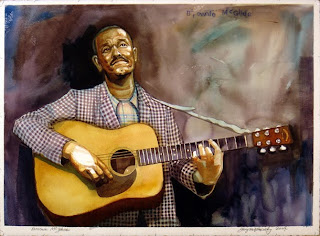 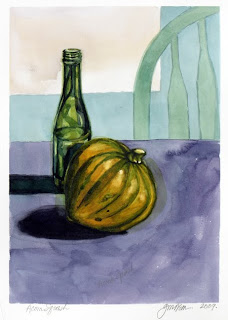 A quick watercolor of the acorn squash that Ann so carefully selected from the vegetable area in our supermarket. I had to wait a few days for the sun to come out in order to take a picture of this (12x16 doesn't fit on Ann's scanner). The remnants of T.S. Ida turned into a classic Nor'easter and whacked my sister in Kill Devil Hills and Dad in Va. Beach. So I finally ordered 2 light fixtures and photofloods for picture taking as I should have long ago - the wooly worm says it's going to be a snowy winter!

Ann bought three squash, we ate two and we both did sketches and painting of this third. In this painting I was thinking of color and composition. (That white square thingy in the back ground is a poster my daughter is working on, filling in rivers and other major geographic information as she studies world geography.)
Posted by Gary at 10:33 AM 6 comments: 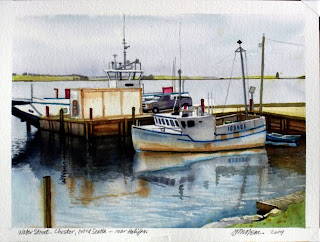 This is my November installment for Bill Guffey's Virtual Paintout challenge blog. This month the city chosen was Halifax Nova Scotia and and its surrounds. I think all painters I knew back in the day had applied or certainly knew about going to school in Nova Scotia. There's an excellent video documentary,"Rivers and Tides" on Andy Goldsworthy that features work he did there. So - I felt some familiarity with this area even though I have never been there. I did the usual Google street map searching and I really wanted to do this lighthouse and rocky shore, but finally chose this view southwest of Halifax in a town named Chester. I had never seen a boat like this - it looks like it came to a sudden stop rather than floating restfully at dock. The view of the bay with its ferryboat reminded me a lot of Hatteras Island here in NC. 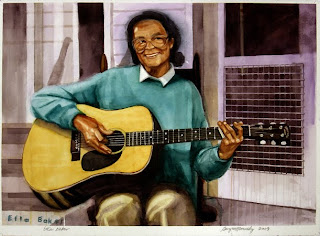 I'm not convinced that this one is really complete - but I have the urge to move on with this series. October was a tough month to keep the studio flowing, with travel and visitors and birthdays - you know the story. So I am posting this as it is now, but may prove to be a WIP after a while, don't know...

Etta Baker was this beautiful woman who played the Piedmont blues as long as a person could possibly have. She was learning the guitar from her father at an age when she couldn't even hold the guitar properly. Etta had a life apart from music, working a factory job and raising a family. It wasn't really until her later years that she started performing for larger audiences and the resulting acclaim that followed. She proved to be influential to younger artists such as Dylan and Taj Mahal. Etta lived not too far from here in Morganton, NC, but I never had a chance to see her play. But somehow I have gained a special attachment to this woman, as I'm sure many have.
Posted by Gary at 12:55 PM 7 comments: 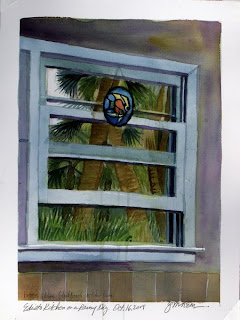 I started this watercolor while at Edisto Beach, SC in a cottage called Foster's Ocean View that we were renting for my daughter's birthday. We only had to cross the street to be at the ocean front. On one of those days it was a dark, windy and wet - and I tried to capture the dark interior of the place which made the outside light seem to glow (without interior lights on), emphasized by the fake stained glass thngy in the window. I had to finish it at home after we got back as usual, because we spent most of out time on the beach. I really do need being at the ocean to recharge, always been that way.