This is my October effort for the Virtual Paintout. This month was Belfast. I did a lot of web searching about, to find where in Belfast you could get a view of the world famous mural/wall paintings. So I did my Google street viewing and found many murals on many streets but loved this view on Shankill Road with what appears to be some kind of horse and buggy race that was rounding the corner. I was well into painting this when I discovered that someone else had found this very view and posted it on the Virtual Paintout site. I wasn't sure what to do at that point - and being that we were going out of town, (etc., etc.) I chose to go ahead and finish this and post it anyway. I was thinking that I could choose another view and do it before the end of this month - but I'm running out of October and have not even started my next blues musician.
Posted by Gary at 3:29 PM 14 comments: 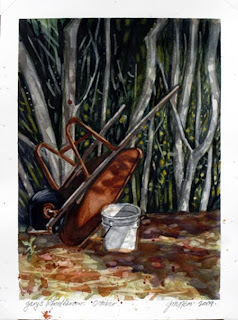 I felt the need to put something up. We've been celebrating my daughter's birthday, which meant getting ready to travel then spent most of last week at Edisto Island in South Carolina. Now we are getting ready for a birthday party and guests (which means some serious house and yard work). I was able to paint this last week before we left. We left Boone and it was a glorious autumn. We came back to winter - see what can happen when you leave town!

This piece was real hard to photo - I guess because it is dark with some contrasting lights. So here it is, sorta. I had too much fun, which I think is evident here, with the Mr. Clean Magic Erasers and an eraser guard. On the one hand I like that you can tell what I used, but on the other I've always felt that technique should be hidden - so I guess you can say I'm undecided. I've been trying to finish my effort for this months Virtual Paintout - I think I can post that one tomorrow.
Posted by Gary at 3:08 PM 7 comments: 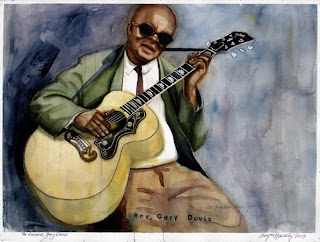 So now I'm looking at Blind Boy Fuller - but haven't found any actual video images of him - yet. I do not intend to copy a single photograph (someone elses composition and copyright) - but to create a composite representation in a way that somehow expresses my impression of the artist after reading bios and recording histories and, most importantly, listening to the music itself. I've got lists laying around everywhere of possible blues artists to do - I'm thinking the more obscure the better.
Posted by Gary at 12:32 PM 12 comments: