A Visual Life History (a work in progress)

My visual life history:
Earliest Memory: my dad showing us how to draw some cartoon character from a cereal box. I spent a lot of time reading cereal boxes. 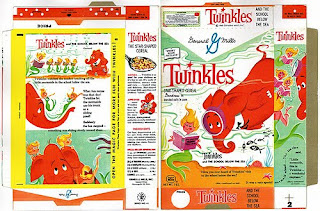 Elementary school: In first or second grade I made a “book” of fishes. This was undoubtedly based on Dr. Suess and fish identification type books. I illustrated them and invented my own fish, like a can-opener fish. 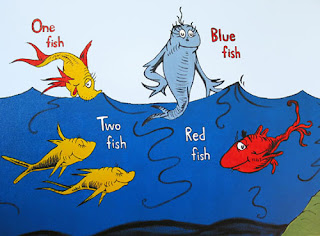 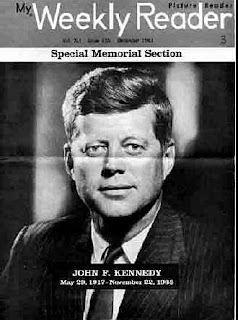 and I remember spending a lot of time in the back of the classroom making a painting of the new school. I don’t remember if it was simply for a bulletin board or for some other venue. But it sorta became a regular thing for me – as the class was going over math or history I was off to the side working on some sort of art related project. This "My Weekly Reader" with the photograph was precisely the kind of thing that I would copy with pencil - usually on a piece of cardboard that I'd claim that backed my father's shirts from the laundry. I remember drawing the astronomers (like Copernicus), the presidents (all of them) and the Beatles (of course), and so on...By 5th or 6th grade I became "the artist" at our elementary school.

Interestingly I don’t remember much about art in Junior High (now called Middle school). We had electives, and I MUST have taken art wouldn’t I have? I do remember Metal Shop, Electric Shop and Mechanical drawing/print shop…hummmm… But to show what a complete nerd I was back then, as I always had been obsessed with the US space program, I did this report in Jr. High, that featured this little illustration of the Mercury capsule. I was lucky to find this stuff on one of my last visits to my parents house in Va. Beach:

And it was in December of 1968, when I was in 8th grade I stayed up all night and charted the astronauts progress to the moon for the first time!

Now I do remember by High School I was doing a fair amount of drawing on my own. I do remember taking a semester or a year of art as an elective – but I don’t remember a whole lot of motivation by any art instructor. Granted, granted I was much more concerned with being cool in high school – and was probably equally interested in tracking hurricanes on my father’s used US Navy weather maps. More about this activity perhaps when I discuss grad school later below. I found this old photo of my big brother sitting in the den of our old house, showing these rather obligatory "sofa art" sunsets - but I do remember having a real sense of accomplishment when I did them. Afterwards they became these sorta things that had always hung in the den... 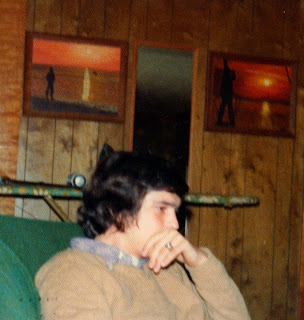 This next image ends up being the only image I have left from those days in high school - (I threw out everything that I had ever done up to a point - seems that my hero Jasper Johns did something like this in his artistic career) - how this only image survived I really can't imagine:
In the above images you can see a strict dependence on what I already “knew”. I was in a lot of ways defensive and defiant towards learning new things. I think all that changed when I became friends with Curt Labitzke :
Curt’s dad was a professional illustrator and he grew up on Long Island – he was just so far advanced of anything I understood about art I’m really lucky I met him when I did (before it was too late). He did stuff like this in undergraduate school:   I felt like I suddenly knew nothing – and I had a lot to learn (I finally accepted it). So I tried developing away from my comfortable realism. I felt like I was on shakey ground. So much of what I was doing became what I was trying to come to terms with in learning Art History (for example). Thus I went through this distinctive cubist stage:
And sort of did some experimenting - mostly ending up undergraduate school doing stuff like this:
This was one of my first paintings in grad school - depicts the dead Soviet leader Brezhnev (still during the cold war) - little did I know that I was to be called (accused of being?) a "liberal" by my older brother in just a few short years. I don't think I payed much attention to politics back then.   In another series called "March Recognition", the imagery had to do with the sensation you have when you look straight down at your feet when a wave washes up past where you are standing and then recedes back before the next wave washes up again. I would often experience a sense of vertigo when doing this - something that I first noted when I was a little kid - and thought about ever since when standing in the surf. This series also, of course, had to do with a great emotional upheaval in my life - the kind you experience when breaking off a relationship you'd rather not break off, when you realize that you really have no choice in the matter and it's time to continue onward with your life. 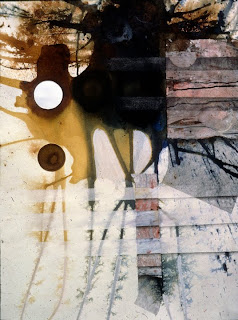 Somehow with this series, the vertical bands came to mean the different levels of the sea due to tides and storms, etc. The circles came to mean the sun and moon - and how they interact with the sea. These circles led to another series of circles - paintings of just circles, used symbolically for other reasons. One thing always leads to another doesn't it. 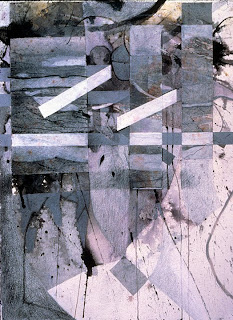 After a while these horizontal bands started to get somewhat dimensional, wrapping around the rectangles (which were always symbols of the self-contained self). I'm not sure why, now, but they must have made sense to me back then...  For my thesis body of work I concentrated on working somewhere in between the mediums of painting and printmaking. The idea I think was mixing media within a set range of materials and processes. What I ended up doing was to combine conventional painting methods with the most simple of printmaking processes - like relief and stencil methods. Here are just a few examples - the ones I liked better I suppose. Overall when I look back on this work it does very little for me - so here I don't even mind the poor scans from very old slides:       As soon as we left town I got a job at a place in Cincinnati called Miller Gallery. I worked there for 14 months and learned a lot about the business, but was generally unsatisfied working in the retail gallery business. I needed an “out”. This “out” took the form of going back to school. It’s hard to quit a full time job to go back to a student poverty level of income (not that I was getting rich working as an assistant manager of a retail gallery). This was a sacrifice that Ann and I did not take lightly. So I entered the Art History department at the University of Cincinnati. I spent a glorious two years studying German, writing papers and reading a whole whole lot. I think every artist could benefit from such an experience – but it does take you away from the studio big time. The three years in Cincinnati I did manage making some artwork: 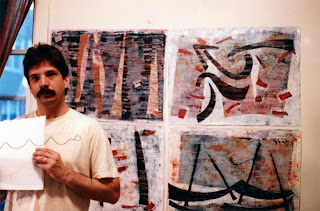 I think that it was because I had all that post graduate art history (but alas without completing my MA in Art History) I was fortunate to get a teaching job here at Appalachian State University in Boone, NC. I already knew Ed Midgett from ECU days – and it turns out that Boone is a beautiful place to live – an easy days drive to the coast – which is always a big big deal to both Ann and I – and now of course with Hannah too. I was also very eager to get back into the studio. I found that it wasn’t a very easy transition from Art History back into the studio. So progress was slow. But my first significant series was what I called my “Junkbox” series. This series started when we experienced a slight disaster our first winter in Boone. We had frozen pipes in a utility room – we found this out of course when the pipes thawed enough to shoot water all over everything that was in that room. One thing that I had in there was an old tackle box that held my accumulation of hardware that I collected through the years. This stuff then started rusting profusely – so becoming otherwise unusable. I decided that I had to do something with this stuff – I had been carrying it around with me for years and years…you just don’t go out and buy this sort of collection for heavens sake! So I started to place each of these pieces of hardware onto paper or canvas that was stretched across a plywood board and leave it out on the picnic table for a week or more – allowing the weather to develop it further. I would add RIT dyes and watered-down gesso , etc. to enhance the surface qualities. Sooner or later I would pick of each individual piece one at a time and treat the results as an under painting or first layers of a drawing. 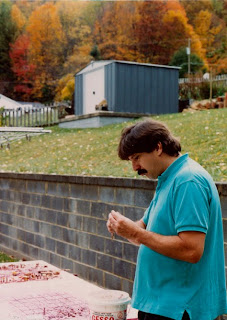