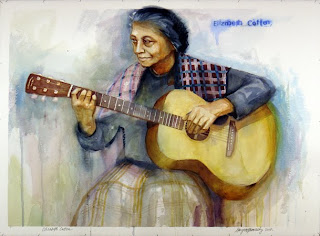 Elizabeth Cotten was originally from North Carolina and had a remarkable story. She essentially taught herself to play guitar after an older brother left home with his homemade banjo. She was so very important because she remembered the music from her youth - the folk songs of itinerant musicians, community gatherings and "church music" of a time before recordings of this genre, so she became a direct conduit of a music that was transformed and passed down from the earliest of days in the south. The church told Elizabeth that worldly music was sinful, so she quit playing for 40 years.

It wasn't until she got a chance job working as a domestic for the famous Seeger family that she was "discovered" and then promoted. So her professional career started when she was well into her 60's. Her song Freight Train was her most famous, being covered by the likes of Peter, Paul and Mary during the folk revival movement 0f the 50's and 60's. Elizabeth was known for her "upside-down" style of playing a right-handed guitar left-handed, a style that made her music and her "Cotten-picking" fingerings quite unique. By all accounts that I have read Elizabeth was a spirited genius who would warn one to be right with God, but one who would love to play you a song.
Posted by Gary at 12:28 PM

Love the watercolor AND the story! As a fiddler, we often see some of these old timers who come to address our groups at J.C. Campbell Folk Art School, down your way. VERY interesting folks!

This series is superior.

This is such a beautiful watercolor, Gary. I loved hearing and learning about Elizabeth Cotten too. Now that you explained it, I see why her guitar looked slightly off to me; it is upside down! LOLOL She sounds as though she was a truly wonderful person with a great spirit!

Your account has me humming "Freight Train"..what a beautiful song. Thanks for sharing all this--and your brilliant portrait of this beautiful woman! (.....and just when I think I can't like Pete Seeger anymore than I already do).

Really??? That's where the phrase "Cotten-picking" came from? See, I learn something new everyday. That and she was discovered by the Seeger family.

Thanks, Gary, for sharing a bit of music history with us in your wonderful series.

A beautiful painting with such a interesting story!
Brilliant Gary!

Gotta tell you when I saw this was another in your music series I let out a little gasp! Excitement! Art AND learning!
What a wonderful time it would have been to know those people...Pete and Woody, Leadbelly, the Weavers...and Elizabeth!
.
Great painting, Gary..as usual. Ever think about a music history art book one day?

Thank you all so much for the support - this series is growing on me the more I get into it. Ellen, my idea (as of right now) is that when I get enough of these I will make a Blog Book of this series. I'm no musicologist by a very long shot - just a fan.

I like the overall detail in this water color and of course your narration.

What a gem of a woman Elizabeth must have been.

How tragic that the church called her music sinful.

I can imagine her playing and singing Freight Train, a favorite of mine.

Gary! Watching this makes me miss your classes. I'm glad you are doing well with your art. I've been doing more and more watercolor as well. I still love people as my subject matter, but I've been trying to get more skilled with watercolor. Within 6 months I've came from doing simple washes to layers added upon layers of color. I can't say each work I do is better than the last, but I learn from each portrait I do.

Beautiful work, thanks for sharing this and the story :-)

It's so lovely to see the old lady playing with her guitar. Beautiful painting!
http://www.artpaintking.com.au/People/View-all-products.html